From confused poultry to pet chicken

Here is a photo journey about the recovery of my most favorite pet chicken, Bareass (BA). She got the name because that is exactly what she had when I got her.

I was looking to build on my already established flock (yeah like 2 chickens listen to me the farmer man!), when the lady at the chicken farm suggested I bring home some ‘reclaimed’ chickens. What an interesting idea I thought, as she described the 50 or so rescued chickens she had picked up from a battery farm.

What I have since learned is that most commercial egg laying chickens are kept to about 12-18 months, and then slaughtered. The story goes that they become uneconomical to keep, something to do with them not laying as regularly and their egg start to vary in size – neither good apparently for egg farmers.

As described on the RSPCA Hens Deserve Better site:

Although hens have a natural lifespan of up to 12 years, their ability to produce eggs declines at around 72 weeks of age and as a result, commercial hens of this age are considered less profitable.

At the slaughtering plant, hens are removed from their crates and shackled, upside down, by their legs on a conveyor system. They are then stunned using the most common method in Australia which is through an electrical water bath and have their necks slit by a sharp rotating blade.

Hens are then plucked, cleaned, processed and packed for further distribution. Carcasses are used for manure and fertiliser, pet food, and lower-quality processing meat for human consumption such as in soups and stocks.

Now I understand the business pressures facing chicken egg producers. The more chickens means more eggs, and the lower the cost of production means more to spend for their own family. It’s not any individual producer but rather the entire system of caged farming that is horrible.

What am I? Says the chicken to the man

Is exactly what these chickens were asking when I first saw them at the rescue farm. They were withdrawn, beak trimmed, sitting in the dirt because they didn’t know how to perch, with faded floppy combs, exhibiting very few chicken like behaviors like scratching and dust bathing, were bruised with marks like bed sores, and generally were miserable creatures that kind of looked like chickens. I was worried what I had gotten myself into, driving home from the farm with 2 broken chickens sitting in a box – How would they go with the other 2 ‘normal‘ ones I already had at home? I’ve since come to realise that chickens are too quirky to ever be considered normal, so forgive me for doubting those sad little chooks.

So I brought them home to join our 2 established chickens, Salt and Pepper. I’d read that putting them all together in the coop at nighttime was a better way to introduce them, and so it seemed to be working. Until morning. Salt was the top chook, and really seemed to enjoy pecking the newbies. It was then I understood how vicious chickens could be to one another. The hardest part to manage was that the rescued chickens didn’t seem to know what to do about it. Here was some weird looking fully beaked white chicken pecking at them, and for BA it was worse because her vent was exposed and made for an easy target.

After about a week things got better. Salt and Pepper accepted the new arrivals, and the two groups mostly kept separate. BA’s vent remained a target for the other three, and in desperation I tried using a blue food dye to make it a less attractive place for them to peck at. Image a middle aged man (possibly carrying several pounds too many), trying to dunk a bald chickens bare back side into a bowl of food dye and water. I don’t think either of us enjoyed it, but it worked and they stopped going for it. BA became really affectionate after that also, to the point where she will allow me to pick her up and hold her for as long as I want. She especially likes it when I scratch her face and around the comb, and cover her head with my hand.

Now I can do some sums just like an egg producer. I bought BA for $10, which is about the same as a BBQ chicken from the supermarket. In the 6 months since, she has given me about 100 quality eggs, converted kitchen scraps into nitrogen rich fertilizer, provided a bug catching and soil aeration service, given entertainment for the family, and me affection. She gets to live like a chicken in a flock for hopefully another decade, safe from industrialized slaughter and free to never again experience the injustice of a caged farming system.

Not a bad deal all round, ain’t it? 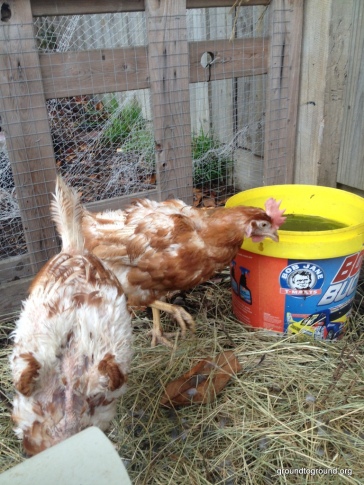 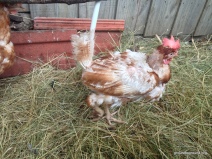 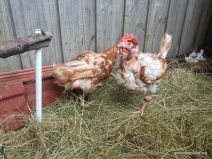 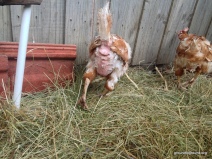 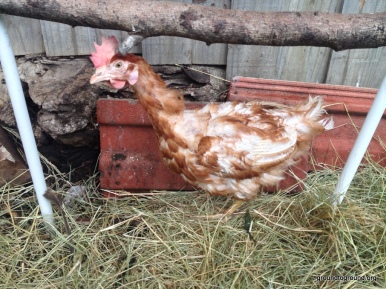 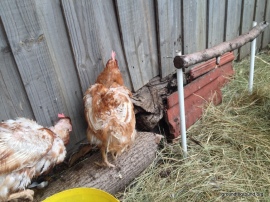 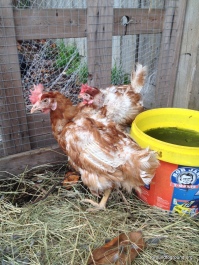 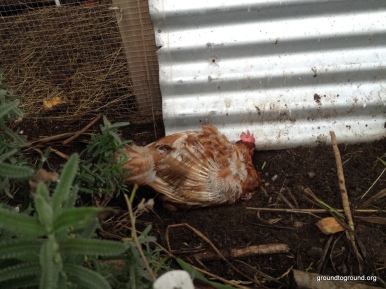