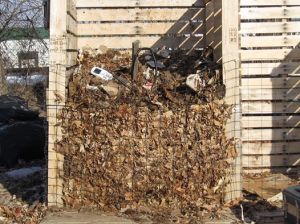 With a heave and a thud, I heard the 50-pound bin of coffee crack.

So that’s what’s costing me almost seven dollars a pop?

I’d have to tell Rachel that I had discovered the culprit and to be more careful when she unloaded the grounds from the car.

While cold weather makes the bins brittle if left outside, a winter composting project has its appeal. For one thing, a sled is easier to haul to the garden than a wheelbarrow; the one we had been keeping on site had long been shuffled away as it had never been secured. Conveyed by sled, the wet grounds squeeze the air out of the snow until it squeaks in response under the weight. The freight leaves tracks like the rabbits do when they come down to eat the buckthorn and as José and his dog will do in the course of their walk, a routine that predates Merriam Station. Visitors will take heart.

Empty half pints sometimes will litter the garden paths that had been laid over well-worn routes to the wet house where drunks go to sleep it off. Broken glass is proof of life too, albeit probably a hard one.

There is also the steam that rises up from the coffee as it is dumped onto the frozen ground. A mystery that is lost in the heat of the summer, water vapors are caught wafting up into the sky by the lights of the late night Chicago arrival or by the early morning inbounding Empire Builder that had departed from Seattle two days ago. Entertaining flashbacks aboard the Amtrak, I feel sorry for those passengers who forwent the sleeper car and am grateful for the hot shower and clean sheets that await me but a few blocks away.

The exhalation of vapors that rise from a hot compost pile is different from the ephemeral steam of the dark warm grounds hitting the low temps. That steam is generated by millions of happy microscopic organisms that breathe, eat, poop and die. At first it took me a moment to recognize this amazing proof of life, no less than the deer trails or the blue snow, which is what you get when those buckthorn-eating rabbits pee in the wintertime.

When I first saw it, I was pulling out the stakes I use to aerate the compost pile (roughly 3′(w) x 4.5′(h) x 3(d)’) with a no-turn method that makes me think of acupuncture. In disbelief, I removed my glove to check for heat. Mindful of retaining it, I jammed a thermometer into the middle of the heap and got 134 degrees Fahrenheit.

Wow. This thing is alive.

While the “acupuncture” method might have saved my back from moving the compost pile from one bin to the next, the project was still physically demanding; I had my reasons for being glad that it was.

4 thoughts on “In the Company of Microbes” 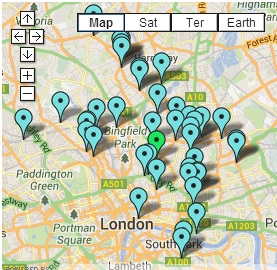