A man stares at me —
his wife’s favourite red couch
in a tip somewhere?

I had such an interesting day recently I just had to share it. It was like being free but not, restful but anxious, impatient to leave to do something else without knowing what to do next. It was (of all things) the day I took my Ford Territory for a 60k service.

So I turn up at Brighton Ford at 10am, leave the car parked over two car spaces (yes I’m the bastard in the 4WD that does that), and walked into the service office. I gave them the keys and my details, they tell me it will be ready by 1pm that afternoon, so what to do?

I decided to talk a walk up Glen Huntley Road Elsternwick, which was once my regular hangout. Some of the shops had changed; A video library was now a restaurant, which in turn had been closed and boarded shut. You could grow a lot of food in that shop was really the only thing on my mind as I pressed my face against the dirt streaked glass. It was dark inside, and the carpet had been pulled out, leaving a pockmarked slab of dusty concrete as the last guardian of mans’ touch. Only one step removed from getting soil to grow all those plants (seeing green by now you see), or hydroponics would do fine also…

My thoughts drift along as I walked along, every now and again seeing something of note:

I was getting hungry by 11am so stepped into a cafe named Edna’s Place, siting down for a long macchiato and a serve of Shakshuka, both of which were damn good. So with not much else to do, I sat and ate slowly, watching life go by, and most of the patrons were doing the same. I saw a man in his 70s reading a newspaper back to back, every single word of it, including the classifieds. Have a feeling that was about the most stressful thing he had to do that day.

Back to the Ford dealer by Noon, with not much to do (besides watching the Australian Open tennis on their small TV – YUK), except wait till 1pm.
My mobile phone breaks the boredom – it is the car service guy calling me from his office 3 meters away! He tells me that I need a special fuel gizmo that does such and such – it will arrive at 1.30pm so the car will now be ready by 3pm. Making absolutely no offer to drive me home (about 10 minutes away), or make arrangements for a loan car, I decide to take another walk. A much more ambitious walk this time, heading South.

Nepean highway cuts a huge swath through inner Melbourne. Being close to the bay makes it windy, or is that just every highway that size? It sounds like an ocean with rolling cars in place of waves, only they kind of sound like waves. This surf is an endless black road 4 lanes either side with a smattering of  trees between them.

Off the main road now and into the suburb of  Brighton, there is more detail now; fountains, benches, stone paths. Front yards are decorative and well kept. Most the the trees are ornamental, with very few edibles of note. A lemon tree here or there. Silver olives and figs once in a while. No vegetable plants growing in front yards that I could see, and a couple of the garden beds I came across had become overgrown by grasses, forgotten like the Xmas puppy.

The soil looked parched and dry like everywhere else. It was just waiting for a good soaking I know it, one more good wash to make it to Autumn. Rain is hard to come by these days.

But what I got most if all from the whole experience is how boring the suburbs actually are. Is this what awaits those yet to retire. Do they plan their going away holidays and think of what to do when they return home? I just can’t imagine that time, and hope it is a long way off. But then there is the gardening…

I made my way through to Bay Street in Brighton, and found a cafe by the name of Rocksalt.

A small bowl of half frozen strawberries and cantaloupe with yogurt cost me 10 bucks, not including the long macchiato, which was very well brewed. But it all hit the spot, including the litre of water. Another 25 minutes or so surfing the web, then back into suburbia.

The walk back was harder; a couple of blisters appeared (ever hiked in old leather sandals?), and my right big toe felt like it had been stretched out by a piece of rope. I put that one down to old age.

Heading back up the highway, it sounds a bit like the ocean hey:

Back in the air conditioned semi-comfort of the Ford dealer… So almost the most boring and insightful of days in recent memory. And the bloody tennis was still on in the waiting room. The men players are all fit and tall, with large shoes (big feet ;), and have the ball on a string, serve at 200 Ks and never get tired. The woman are more or less the same but grunt.

One of them was wearing a red Lacoste shirt, they still make those? Yep, the judge had a bright orange one. Just needed to find the green one to have a set of traffic lights.

The coffee machine made a surprisingly good short black, enough to fight away my 3.30pm hunger pangs. Waiting here was like being at the airport waiting room – a nowhere nothing place on the way to somewhere better.

Back in the car and on the way to get the family. Sure it could be worse – I could be that bird! 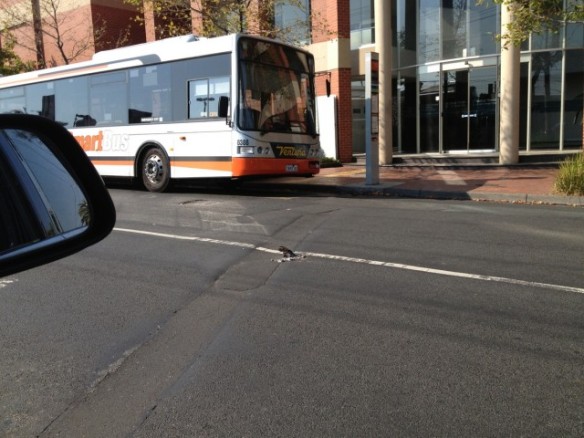