Starting a conversation about my attempts to grow prickly pear go something like this:

“To grow?” they ask, brows furrowed.

“Yes…” Here it comes, but they mean well.

“You mean prickly pear, that cactus weed? You want to… grow it!?” Shock, Horror, et cetera.

History of  a Weed

It is somewhat understandable that prickly pear has a bad reputation here in Australia, having found ideal growing conditions and no natural enemies, it rendered whole agricultural areas unusable. An excellent summary of the ‘fight’ against prickly pear can be found here. I guess it would have been easier to change our habits and  harvest it to eat like they do in Mexico, having recognised it as a valuable alternate food source, but that is a whole other issue.

Just the fact that we use terms like ‘war’, ‘fight’, and ‘battle to eradicate’, in describing our relationship with a plant is at about the same level of reason as when discussing our need in the West to incorporate Entomophagy.

Interestingly, this fact sheet from the Mississippi State University calls out the creature that solved the Australian issue – the Cactus Moth (Cactoblastis cactorum) as the bad guy in all this, and not the other way around.

Just so you know I’m not the first one to stumble across the idea – here is bushcraft guru Tony Nestor:

It is not just the fruit that is edible – you can also eat the cactus pads (Nopales), which the video below will help you with, and here is a recipe for the Mexican dish, Nopales Salad.

So what we have is a cactus plant that can grow quickly in poor soil and conditions, produces plenty of edible fruit, and  gives you pads that can be eaten like a vegetable.

How to Grow your Own

This is rather easy – just follow the steps below:

A spider was living on the pad 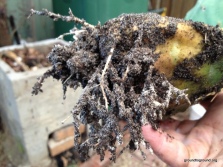 Roots growing from base of prickly pear

I hope you have enjoyed this article on how to grow prickly pear from a cutting. Having done some research in preparing this story for your good self, I discovered the history behind the Australian slang word ‘Cactus‘ and what it actually means. Having used the term for close on 4 decades now, well you really do learn something new everyday…

6 thoughts on “How to Grow Prickly Pear from a Cutting”