You can tell a lot about a person by how they eat an apple. Well, maybe that is a load of crap. Actually, I don’t know it could be true. How about we make an assumption that it is. Gadzooks!!!

Ok now it’s getting closer to the core.

This is more like it, now at ‘half core’. If you take a bite of the flesh some core it all tastes a little like an almond cake. That could be that inert form of cyanide, but it’s all good. 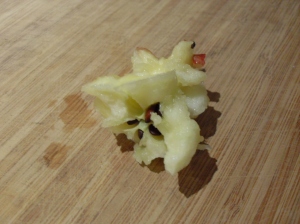 Now we have the thin red line. The core is gone, and we are left with a thick, wooden, fibrous stem. Are you up for it?

Now this is ‘Hard Core’

Now go eat an apple. Let me know where you stop, if you can!!

5 thoughts on “Apples and the core of it all”